This began as another of my emigration stories based on the ships my relatives sailed on when they left the Kent Sussex borders in the early 1800s. In the process of checking a detail using Trove, the Australian newspaper website, the story developed a life of its own and shows what a valuable tool newspapers can be - and also that not all emigration stories had a happy ending.

Daniel is a man of some mystery with conflicting dates regarding his birth but he was most probably baptised in Northiam, Sussex on 18 November 1798, the son of William and Martha Tree and was therefore the younger brother of Henry Tree my 4 x paternal great grandfather.

In 1817 banns of marriage were called showing that Daniel lived in Canterbury and his future wife Mary Hodges in Bethersden, Kent. Online registers are unclear about where the marriage took place, whether it was  Canterbury or Bethersden, but shortly after the wedding on 24 August 1817 their daughter Marian Celia was baptised in Bethersden.

On the South Australian passenger site Daniel is shown as a shoemaker, leaving London on the Resource on 7 October 1838 and arriving in South Australia on 23 January 1839. With him on arrival were three children Adeline, Mary Anne (Marian) Cecilia and Edwin George. His wife Mary and a further child died at sea. A later comment made by Daniel suggest that Mary died following childbirth 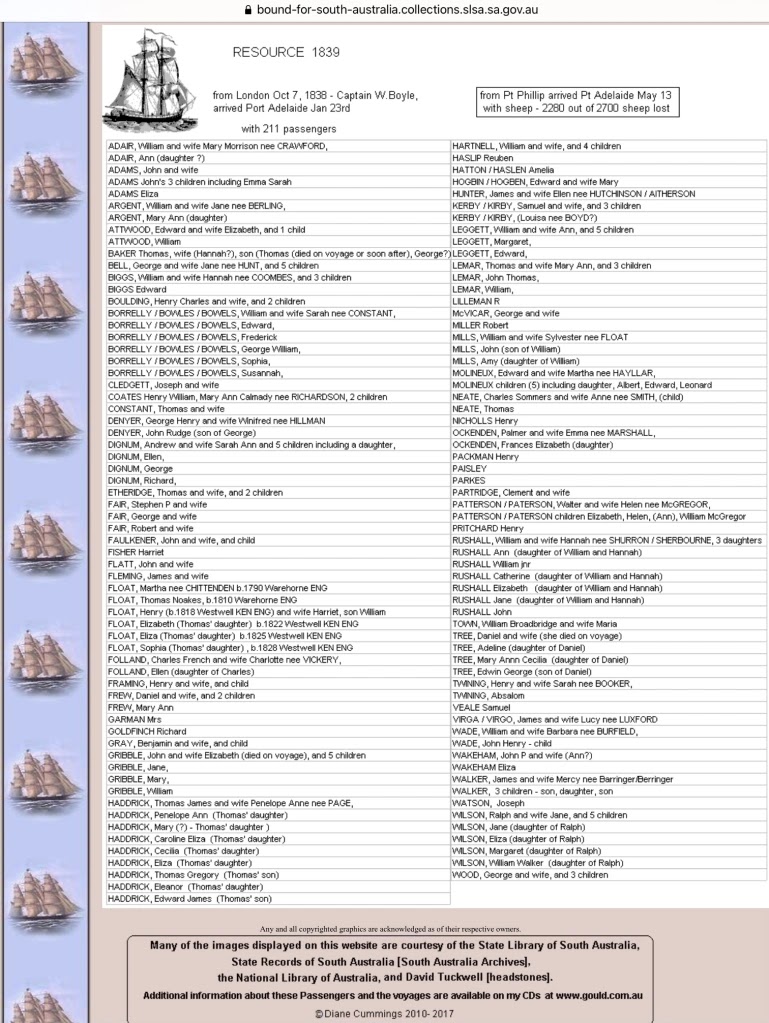 Another passenger Thomas James Haddrick, kept a diary of the voyage which has been transcribed and refers to the death at sea of Mrs Tree on Friday 22 November 1838 and of ‘Mr Tree’s child’ on 14th December. 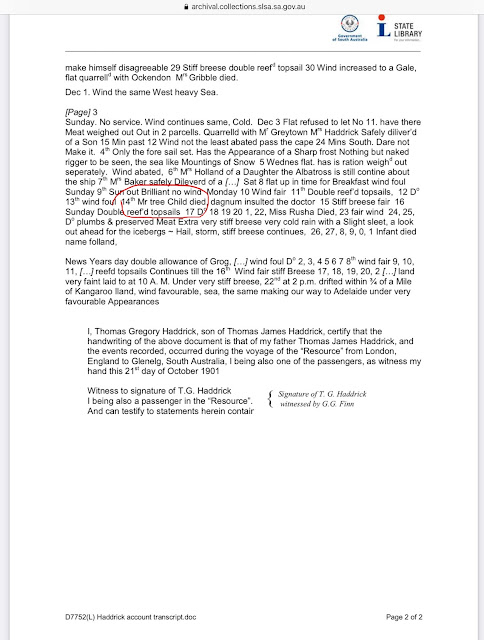 The widowed Daniel arrived in Adelaide in 1839 aged around 40 with three children 22, 17 and  8 and initially seems to have worked as a shoemaker. By 1845 he was sufficiently established in the community to sign the “Memorial by the Colonists of South Australia Against the Introduction of Convicts”. [a]

In 1846 his daughter Mary Ann married William Lloyd. [b]

The following year Daniel was granted a licence in respect of the “Shoemakers’ Arms” in Adelaide beginning a stream of numerous licensing applications, refusals, grants and appeals over the years and the frequent involvement of “Mr Hanson”.

Around this time Daniel served on the jury and the newspaper report shows an independent mind!

It doesn’t look as if Shoemakers’ Arms lasted long, the licence being refused in 1849 for lack of accommodation. The premises had just one bedroom for the family and one which could be let out if needed.

In June 1849 Daniel was granted the licence of the Crown and Sceptre, Gillespie Street, Adelaide where he remained for the next decade. [c]

The 1850s, relationships, the law and a second family

1851 was a busy year for Daniel. In May he was charged with stealing some wearing apparel from Robert Berwick. Reading the report below it appears that Daniel may have been involved in a relationship with Robert’s wife and the case was subsequently dismissed.


Later that same month he was charged with allowing three pigs to be at large which was also dismissed.
But he was still able to find time to attend the AGM of the Licensed Victuallers Society that July.
In October Sarah Berwick took Daniel to court for the payment of wages due to her. Most likely she was the wife of Robert Berwick referred to above who Daniel had been in a relationship with. In any event, the case was dismissed.

On 25 November 1851 Daniel then aged around 53 married his second wife Charlotte Manning aged 28. Between 1851 and 1856 they had three sons. Another son was born in 1858 but died shortly after birth along with his mother, a fact which becomes important later on in this story.

Meanwhile Daniel continued to fall foul of the law for various infractions: not clearing his taproom or closing the doors, failing to keep a lamp alight, keeping a fire in the open air etc, but despite this his licence for the Crown and Sceptre was renewed in 1855.


In 1857 Daniel became embroiled in more controversy surrounding the inquest into the death of a neighbour’s child by scalding, which also involved  his opinion on taking the oath.

Having been accused of being a bad neighbour Daniel wrote to the newspaper in his defence: 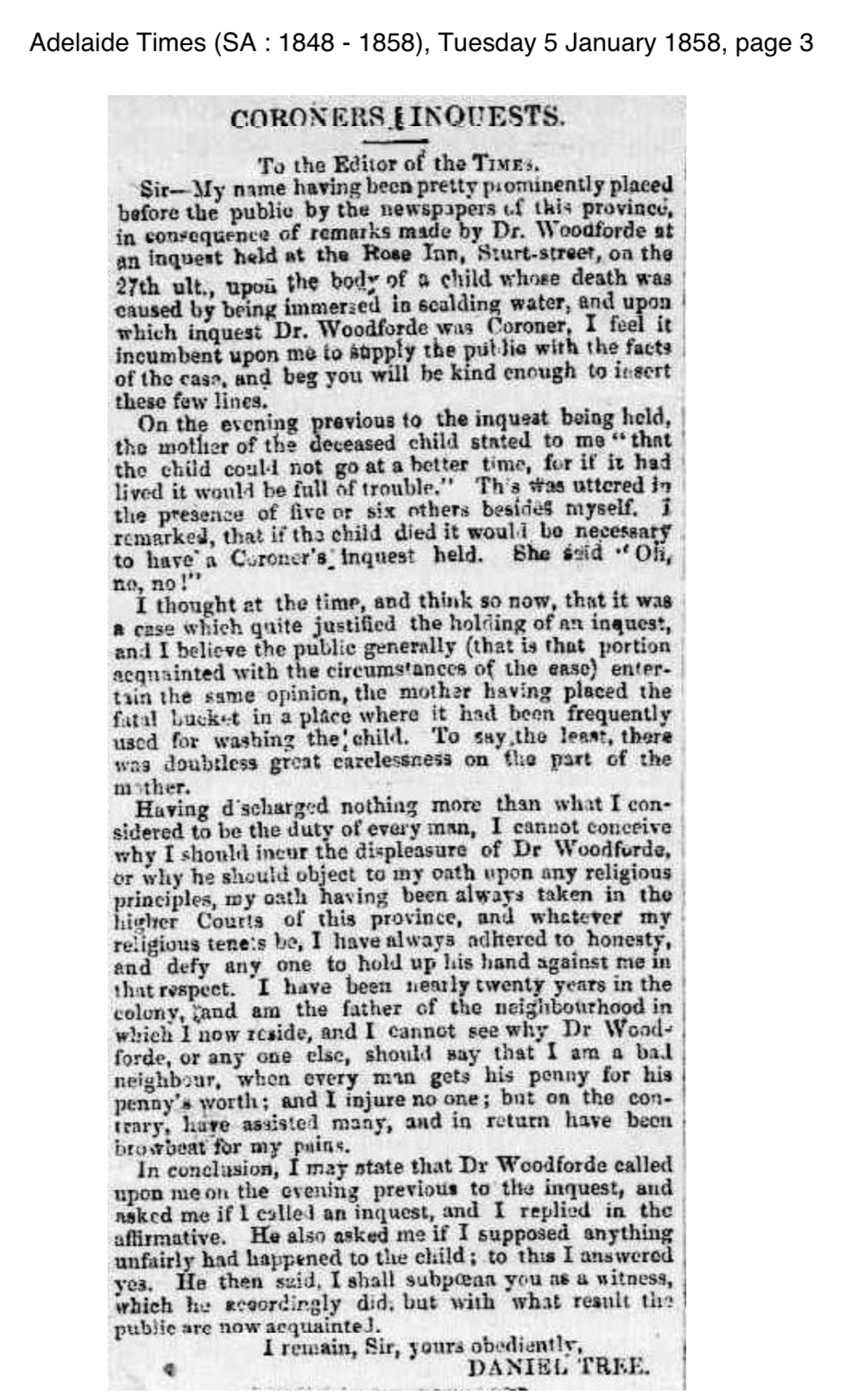 Early in 1859 he was charged with serving alcohol to a drunken woman. Again the case was dismissed [e]

It all starts to go wrong

Daniel’s second wife Charlotte died on 9 March 1858 eight days before the death of her newborn son Frederick. After three months had passed, on 3 June 1858, Daniel married his third wife Sarah Louvell. Nine months later she too died in childbirth together with her twin babies delivered 5 days apart. A Coroner’s Inquest was held which was reported in the newspapers at the time with much emphasis being placed on the delay by Daniel in sending for a doctor and also for not obtaining the medicine prescribed. In one report he is quoted as saying “ D…n the doctors. I won’t have a doctor in the house. They killed my other wives - two before you; and I won’t have one in my house”. [d]

Summing up the Coroner told the Jury that he believed all the evidence that it was necessary to take was now before them, and the case was therefore in their hands. His own opinion of the evidence was that it left no doubt as to the gross display of indifference and heartless brutality on the part of Daniel Tree towards his wife. He was appealed to by the poor creature in her agony to send for medical assistance, and he refused to do so. That was conduct so cruel that he hardly knew how to characterise it. He felt bound thus to express his detestation of the man's behaviour, though at the same time he was aware there was no law which compelled a person to have a medical man in his house against his inclination. Such cases, therefore, it was hard to meet ; but he thanked God that its parallel did not often disgrace the colony.”

And it was reported that: The Jury find that the death of Sarah Tree was caused by puerperal fever, induced by protracted fever and exhaustion. The Jury cannot separate without expressing their abhorrence of the brutal, unnatural, and unfeeling treatment evinced by the husband, Daniel Tree, and of the neglect which it appeared he permitted the deceased to remain in during such an occasion.

From that moment onwards Daniel’s life seems to go downhill.

Later that month his application to renew his license under the Licensed Victuallars Act was refused on account of his “reprehensible conduct” thereby depriving him of his main means of income. [1] 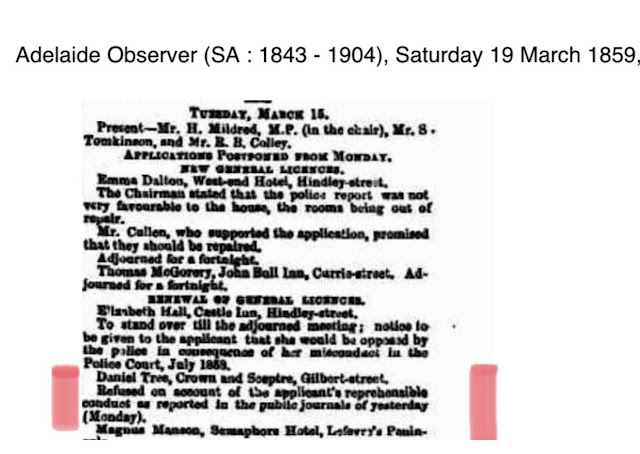 When Charlotte died, Daniel was 60 with three young sons aged 6, 4 and 2 so perhaps it’s not surprising he remarried. Eliza Parkinson, became his fourth wife on 4 June 1859 but having lost his livelihood he had fallen on hard times and at the beginning of August he was sentenced to two months imprisonment for deserting his three children, by leaving them at the Destitute Asylum. And in November, Daniel described then as a labourer and former publican, was sentenced to a further two months for deserting his wife. [2]


The following January he was charged with threatening language and taken into custody.

And in September was again imprisoned for deserting his children.


In 1861 Daniel applied for free schooling for his children on the basis he was unable to pay but it appears from a later report below that he was unsuccessful.

But despite everything that was happening in his personal life Daniel still signed a petition against the erection of Adelaide Town Hall in May 1863.

In May 1864 the article below in the South Australian Register made specific reference to the Tree children being left in the absence of any educational provision to run the streets of Adelaide whilst their father was in prison for debt.
In October Daniel was imprisoned again for deserting his children by again leaving them at the Destitute Asylum.

In May 1864 Daniel spent some time in prison for debt and in October bankruptcy proceedings were commenced against him.

Death of an Old Colonist

Daniel died in January 1872 aged 74 a long way from the place of his birth and possibly - who’s to say- with his dreams of a better life unfulfilled.

And as a postscript, even after death, Daniel was still featuring in the local papers….

About the author: Heather Bradshaw
Tell us something about yourself.

Are you sure you want to delete your Profile?

This will remove all of your posts, saved information and delete your account.

This cannot be undone.

Ancestorian uses cookies to manage your feed and notifications (no tracking or advertising). By clicking “Accept”, you consent to the use of all cookies.
Cookie settingsACCEPT
Manage consent

This website uses cookies to improve your experience while you navigate through the website. Out of these, the cookies that are categorized as necessary are stored on your browser as they are essential for the working of basic functionalities of the website. We also use third-party cookies that help us analyze and understand how you use this website. These cookies will be stored in your browser only with your consent. You also have the option to opt-out of these cookies. But opting out of some of these cookies may affect your browsing experience.

Necessary Always Enabled
Necessary cookies are absolutely essential for the website to function properly. This category only includes cookies that ensures basic functionalities and security features of the website. These cookies do not store any personal information.
Functional
Functional cookies help to perform certain functionalities like sharing the content of the website on social media platforms, collect feedbacks, and other third-party features.
Performance
Performance cookies are used to understand and analyze the key performance indexes of the website which helps in delivering a better user experience for the visitors.
Analytics
Analytical cookies are used to understand how visitors interact with the website. These cookies help provide information on metrics the number of visitors, bounce rate, traffic source, etc.
Advertisement
Advertisement cookies are used to provide visitors with relevant ads and marketing campaigns. These cookies track visitors across websites and collect information to provide customized ads.
Others
Other uncategorized cookies are those that are being analyzed and have not been classified into a category as yet.
SAVE & ACCEPT
Powered by