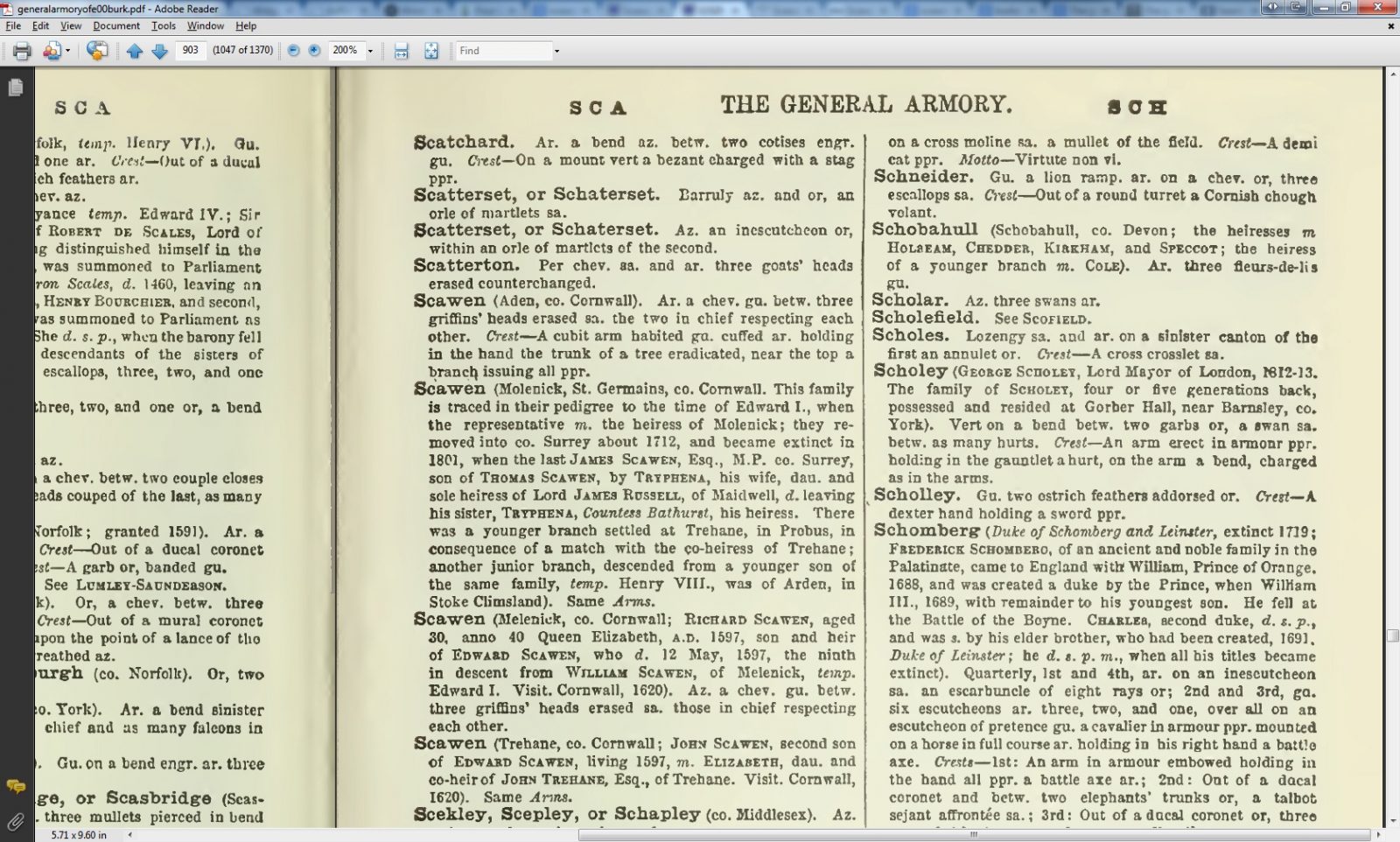 We have adopted one of the Scawen coats of arms (well, just the shield) as the logo for the Scowen.org site. We do this because all references to a Scowen coat of arms refer back to the Scawen name. We still haven't been given any hard evidence that the two names are related (can you provide some?) but until we have either proved or disproved the link, these are the arms we will use.

There are four different entries for Scawen in Burke's General Armory. They follow. We have taken the description of the first entry and created the shield used in the site icon. One day, we would like to create the crest too, but we don't have the graphic design skills for such tasks. Do you?

Scawen (Aden, co. Cornwall). Ar. a chev. gu. betw. three griffins' heads erased sa. the two in chief respecting each other. Crest—A cubit arm habited gu. cuffed ar. holding in the hand the trunk of a tree eradicated, near the top a branch issuing all ppr. 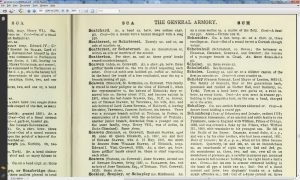 Scawen (Molenick, St. Germains, co. Cornwall. This family is traced in their pedigree to the time of Edward I., when the representative m. the heiress of Molenick; they removed into CO. Surrey about 1712, and became extinct in 1801, when the last James Scawen, Esq., M.P. co. Surrey, son of Thomas Scawen, by Tryphena, his wife, dau. and sole heiress of Lord James Russell, of Maidwell, d. leaving his sister, Tryphena, Countess Bathurst, his heiress. There was a younger branch settled at Trehane, in Probus, in consequence of a match with the co-heiress of Trehane; another junior branch, descended from a younger son of the same family, temp. Henry VIII., was of Arden, in Stoke Climsland). Same Arms.
Scawen (Melenick, co. Cornwall; Richard Scawen, aged 30, anno 40 Queen Elizabeth, a.d. 1597, son and heir of Edward Scawen, who d. 12 May, 1597, the ninth in descent from William Scawen, of Melenick, temp. Edward I. Visit. Cornwall, 1620). Az. a chev. gu. betw. three griffins' heads erased ea. those in chief respecting each other.
Scawen (Trehane, co. Cornwall ; John Scawen, second son of Edward Scawen, living 1597, m. Elizabeth, dau. and co-heir of John Trehane, Esq., of Trehane. Visit. Cornwall, 1620). Same Arms. Download the whole General Armory for free from the Internet Archive.

Notes About these Entires

Some words have been undelined on Scowen.org for emphasis. In the arms we have chosen (1st entry) the colour of the arms is listed as Ardent (silver or white). In the third entry, the arms are described the same but are listed as Azure (blue). The second and third entries are for the same branch of the family, as in those from Molenick or Melenick in Cornwall, who are said to have died out around 1801.  However, the second entry refers to the same arms as described in the first entry. Either the 1st or 3rd is likely to be listing the arms colour incorrectly. The question remains, however, of whether or not the Scawen arms can be used to represent the Scowen name. Are we really the same family? Do you have evidence to prove one way or the other? Contact us and let us know.

Originally published on the now closed website, Scowen.org on 01 Jan 2013

Welcome to the Scowen Family History Group on Ancestorian.

If you are here looking for a vast family tree covering all of the Scowens known to have graced the planet during the last 1000 years, you're about to be sorely disappointed. Although the developer and main contributor to Scowen.org (now the Scowen group) is in the process of assembling such a family tree, it is not about to be published here in the near future.
NOTE ADDED: Such a tree requires much time and perseverance and should be as correct as possible prior to publishing. I do not want to contribute to the already huge amount of misinformation about the Scowen name and family.

You Will Also Find:

Scowen.org (was) a collective effort that was lead by Greg Scowen, a young (by Family History standards) genealogist/family historian that hails from the NZ branch of the family, that which developed after Joseph Ponder Scowen spent time in New Zealand.
Greg is a web developer and librarian working for Switzerland's biggest library. In his spare time, he has also written and published novels and dabbles in family history and landscaping. In 2012, Greg completed a Master's degree by writing a thesis that investigated online family history, what the users want and what the sites are offering them. As part of the study, Greg was exposed to over 20,000 records relating to Scowen family members within the UK alone.

Scowens: We Want You (or at least your content)!

Please, if you have researched a branch of the tree or an interesting question about the Scowen family or name, please get in touch with us via this Ancestorian Group and share your stories or contact us here on the site. If you have documents to back up your stories, we would love to add them to the group. The same goes for your family trees.

The Ancestorian Newsletter has been a way of sending out updates from the Blog part of the site to interested users on a weekly basis.However, many users and newsletter subscribers don't seem to understand that they have requested the newsletter and have in turn reported us as Spam. We hate Spam at Ancestorian and the last thing we ever want is for users to think we are spamming them. The newsletter has, therefore, become more of a problem than it is worth to keep sending it out.

Where to Get Updates and Deals

We also have a Facebook Page and a Facebook Group where all of our news and deals get posted. If you go and 'LIKE' the page and join the group, you can be sure not to miss out - and besides, there are a lot of nice folk over there.The Quickstart page also includes links to the Facebook Page and Group.

The last newsletter will be the one that you receive with a link to this post in it. That newsletter will be sent on 10.03.2020Any subscribers of the newsletter (and other members who didn't subscribe) will still occasionally be contacted if there is any pressing issue that needs to be communicated with all Ancestorian users.You can set your e-mail privacy preferences in your Account area. 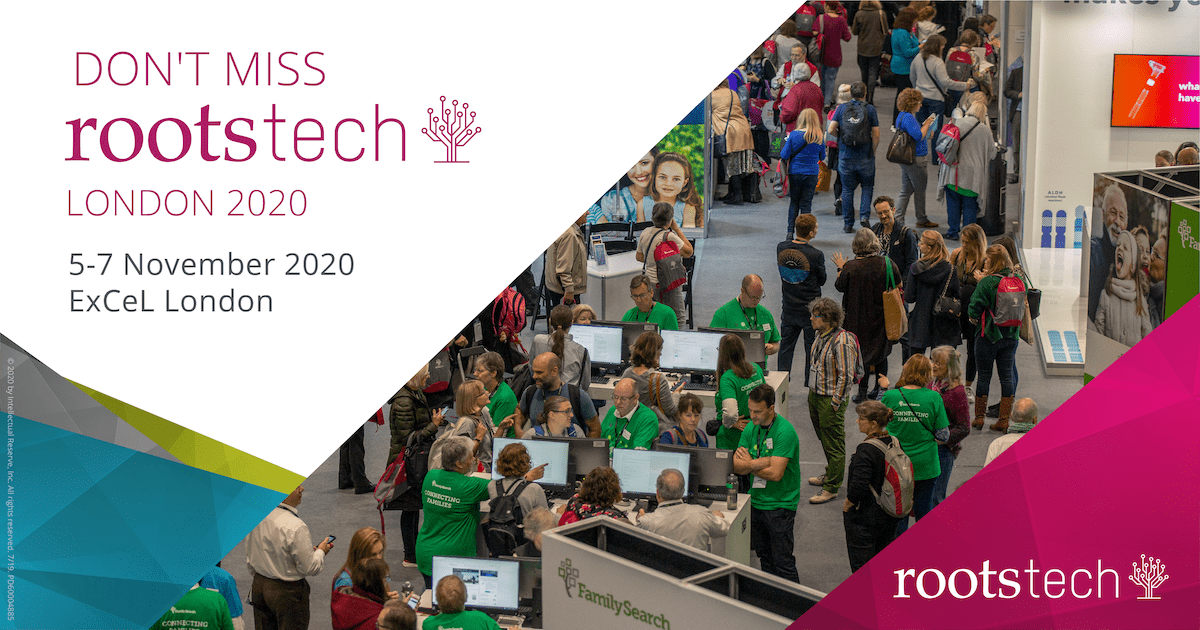 The world’s largest family history conference is coming back to London this November and you’re invited!

Announcement to Be Made at RootsTech USA today

During Steve Rockwood’s keynote address, he and Jen Allen will announce the opening of RootsTech London registration and the special early bird price of only £79 for a full conference pass. One day passes will be available for only £39.Take advantage of pre-early bird pricing and secure your seat. Passes start at only£39. https://www.rootstech.org/london

RootsTech is coming back to London on 5–7 November at the ExCeL.

It’s never been easier to trace centuries of love and romance in your family tree. Discover your ancestor’s marriage records and so much more with a 40% discount on all 12-month subscriptions to Findmypast.

This limited time offer is available to all new and returning customers from now until midnight (GMT) on Sunday 23rd February 2020. Click HERE and enter the promo code FMPLOVE40 to claim your discount on any of the following 12 month subscription options.

·         Starter - All the crucial records for starting a family tree and tracing your roots back five generations. The Starter package also enables you to benefit from the research of other members by matching common ancestors to the names stored in your family tree

·         Plus – Billions of family records that will enable you to take your research further and tell a more detailed story. Search for your ancestors across all birth, marriage, death, census, work, education, military, travel and social history records

Building a family tree on Findmypast is the first step towards exploring your family’s story in vivid detail. Starting a tree is free, simple and Findmypast’s automatic hints will search birth, marriage, death, parish, census, military and newspaper records, as well as trees created by other members, to suggest as many potential matches as possible.

Findmypast is home to a vast archive of more than 13 billion family history records that continues to grow by an average of 4 million names per day. The site’s unrivalled collections of British and Irish records cover a wide range of resources, many of which you won’t find anywhere else online.

To find out more about tracing an ancestor’s marriage, see our marriage record guide: https://www.findmypast.co.uk/blog/family-records/marriage-records-guide

This guide is permanently available at: https://www.ancestorian.com/guides-how-to-use-ancestorian/place-naming-conventions/

The standardisation of geographical place names - both in the field of genealogy and geography - is a debated topic. Differing people have varied ideas about how best to manage and format place names.

Indeed, the GEDCOMs that we import into Ancestorian in an attempt to automatically identify the places you research or are knowledgeable of are full of inconsistencies in place name structure. Even my personal GEDCOMs suffer terribly from this.

To counter the huge problems this causes, we have had to adopt some place naming conventions here on the site - so we can offer a consistent experience.

When you import a GEDCOM, we try to identify as many potential inconsistencies as possible and we notify of you of these. This gives you a good opportunity to print out a list and make amendments in your software if you would like. Ancestorian, however, will continue to import your place data as it is.

Although these four countries are currently correctly referred to as the United Kingdom, for the purposes of clarity and simplicity, at Ancestorian we refer to them by their separate country names. 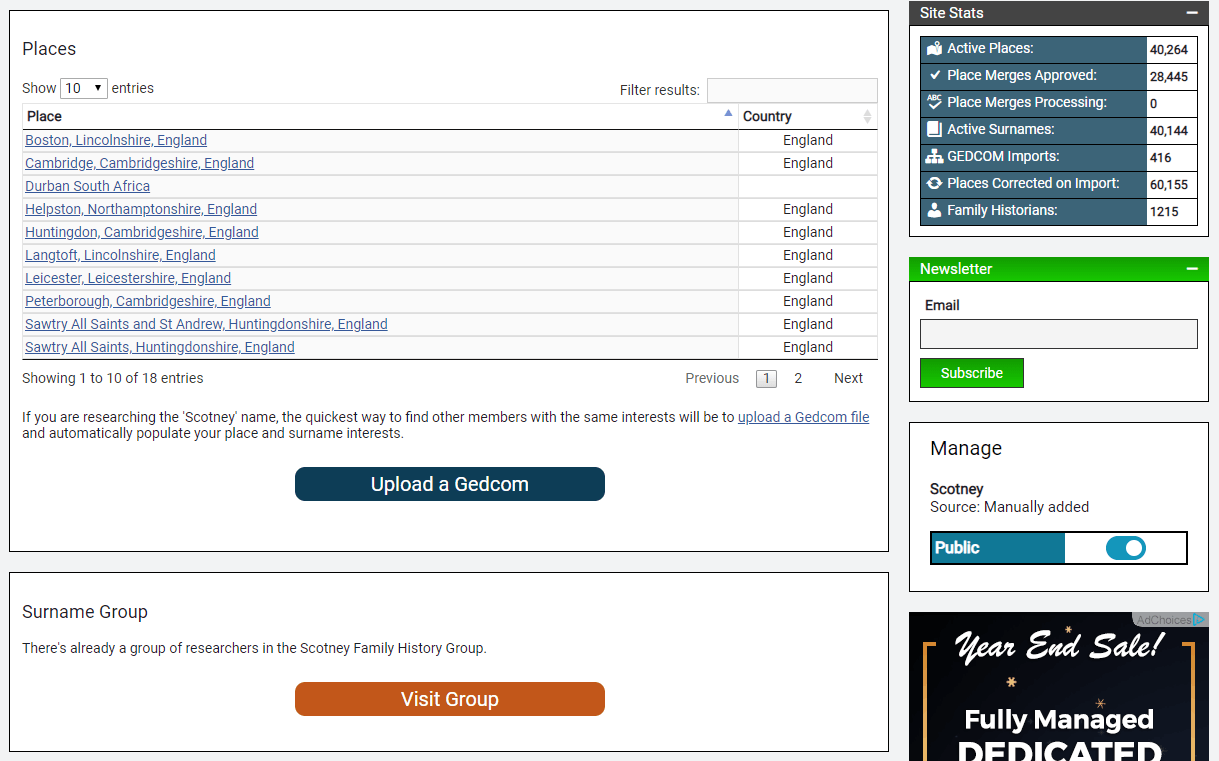 This guide is permanently available at: https://www.ancestorian.com/guides-how-to-use-ancestorian/guide-how-to-find-people-researching-the-same-name-as-you/

This is a really short guide because, well... frankly, this is what Ancestorian makes so easy! Read on. 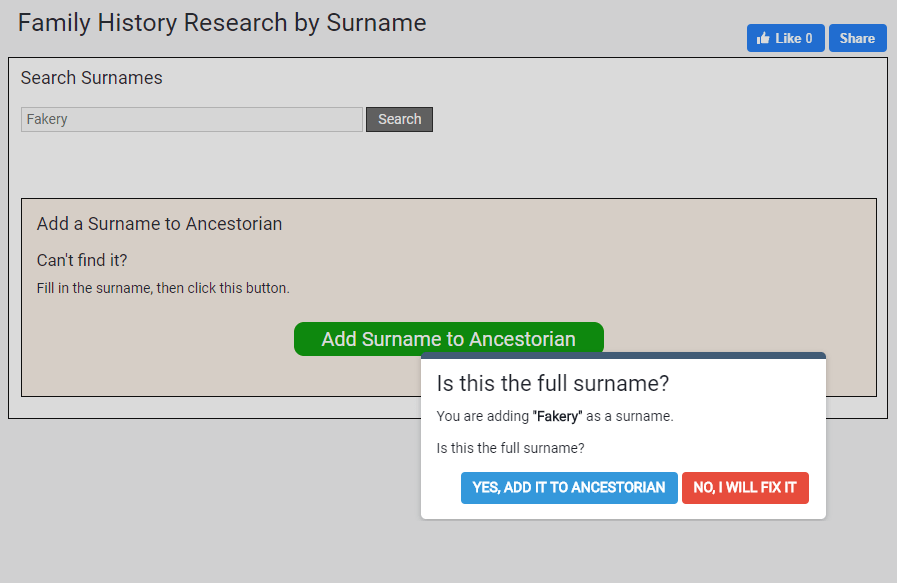 This guide is permanently available at: https://www.ancestorian.com/guides-how-to-use-ancestorian/guide-how-to-add-a-missing-surname-to-ancestorian/ 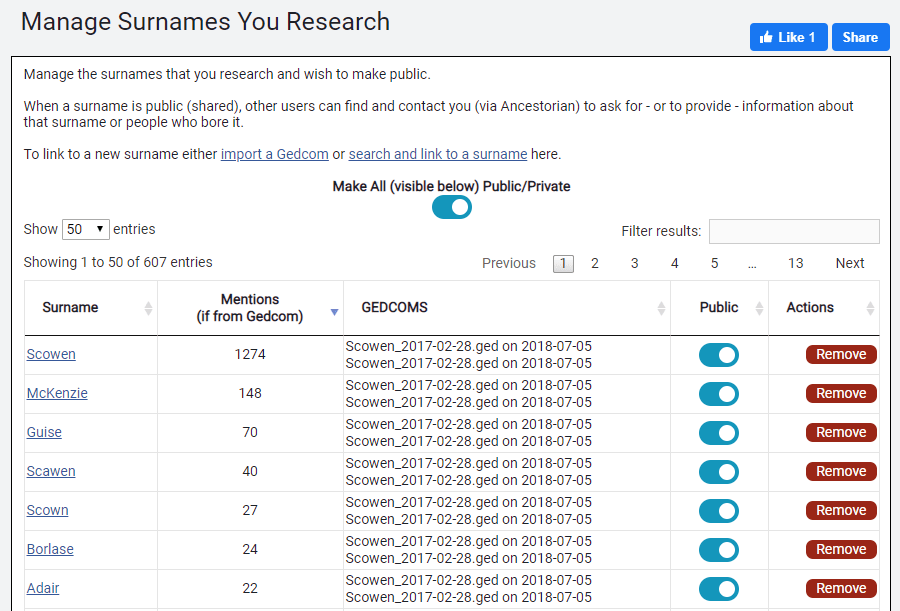 This guide is permanently available at: https://www.ancestorian.com/guides-how-to-use-ancestorian/guide-manage-surnames-you-research/

This guide is permanently available at: https://www.ancestorian.com/guides-how-to-use-ancestorian/guide-how-to-add-a-surname-to-your-research-interests/